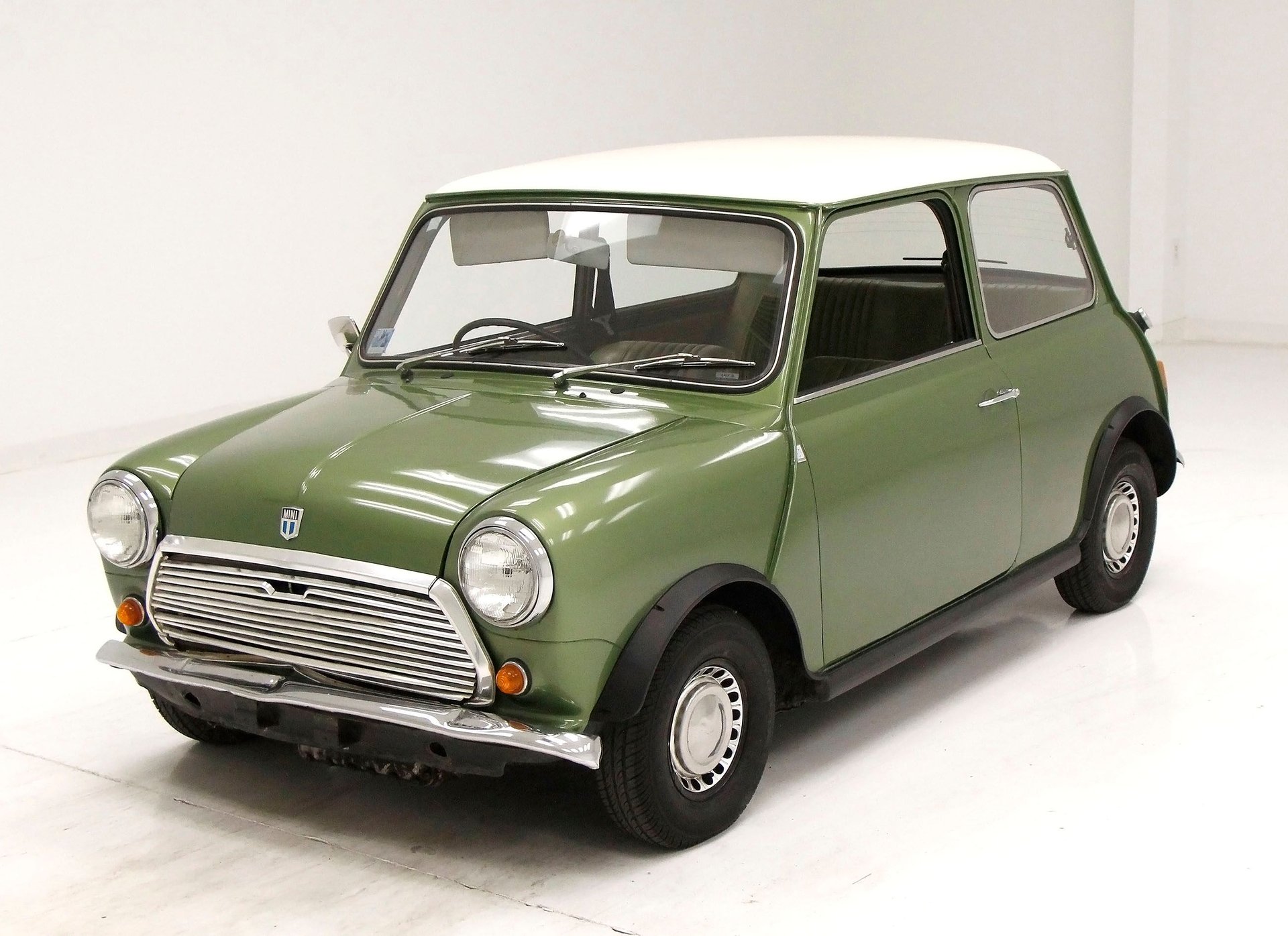 The car model was named the Mini because it was, well, small. John Cooper was a designer of Racing and Rally cars, who saw potential in using the Mini as a basis for Rally cars. Technically, only the tuned high-performance models designed by him were called Mini Cooper – in colloquial use, the name stuck for all Minis, though. If you've ever witnessed one of the original design Minis race. they are fun to watch because they are like go carts in that they just slide around turns!

For consignment a 1973 version Mini Cooper right out of the Longbridge Mini assembly plant in jolly old England. This car appears to be in unrestored condition with having undergone only a respray on the exterior. A right-hand drive edition you may have a propensity to go down the road on the wrong side.

Exterior
Bathed in Avocado Green paint appears in good condition, maintaining its luster. An area of rust has formed near the trunk hinge on the driver's side, and some dents and dings are noted throughout. On the front grille there has been a mishap that has left the bumper with a dent and misaligned the grille and hood. Badging is all there slightly faded but original. Black plastic is framing the wheel wells and covers the rocker area. An off-white roof is atop and has interesting drip moldings that extend to the fenders from the roof on the A and C pillars. Black wall 145/80R10's wrap standard 10-inch steel wheels adorned with some shiny caps.

Interior
Utilitarian simplicity abounds inside with Olive vinyl covered buckets in front and a small bench in the rear. This material also covers the door panels that sport crank operated windows. A black dash front houses a centrally located oval gauge cluster with 3 round gauges. The original patina steering wheel fronts this dash. An automatic shifter sits in the center of a sea of olive carpet, mostly spit spot and no floor mats are present. A white tight headliner hangs above and is clean.

Drivetrain
A pop of the bonnet and we are greeted with 60.8 ci horizontally opposed 4-cylinder engine, appearing in original condition. Some rust and patina are noted, and there is a 1-barrel carburetor atop, and a 4-speed automatic which drives the front wheels. Interestingly the radiator is at the side instead of the usual front mounted radiator which could take advantage of airflow through the grille.

Undercarriage
Areas of invasive rust are noted on the rockers, floor pan corners where they meet up with the wheel wells and where the frame meets the unibody. Previous efforts to remediate this rust are seen, however the rust has returned. Surface rust is seen throughout suspension and wheel mechanicals, as well as on the rear of the frame. These areas will eventually need attention or structural integrity will be compromised causing some bloody troubles.

Drive-Ability
After a slight cranking it fired up, and we popped it into gear, and we were off for our test tool. The transmission shifted smoothly, brakes worked fairly well, and it gave us a smooth ride. It takes just a bit to become accustomed to the right-hand drive, but all in all the experience was tip top.

We were absolutely chuffed with this little car, even with its faults which left us a tad gutted, our overall experience was cheeky. From its bonnet to its boot, a sum it up would be cute!