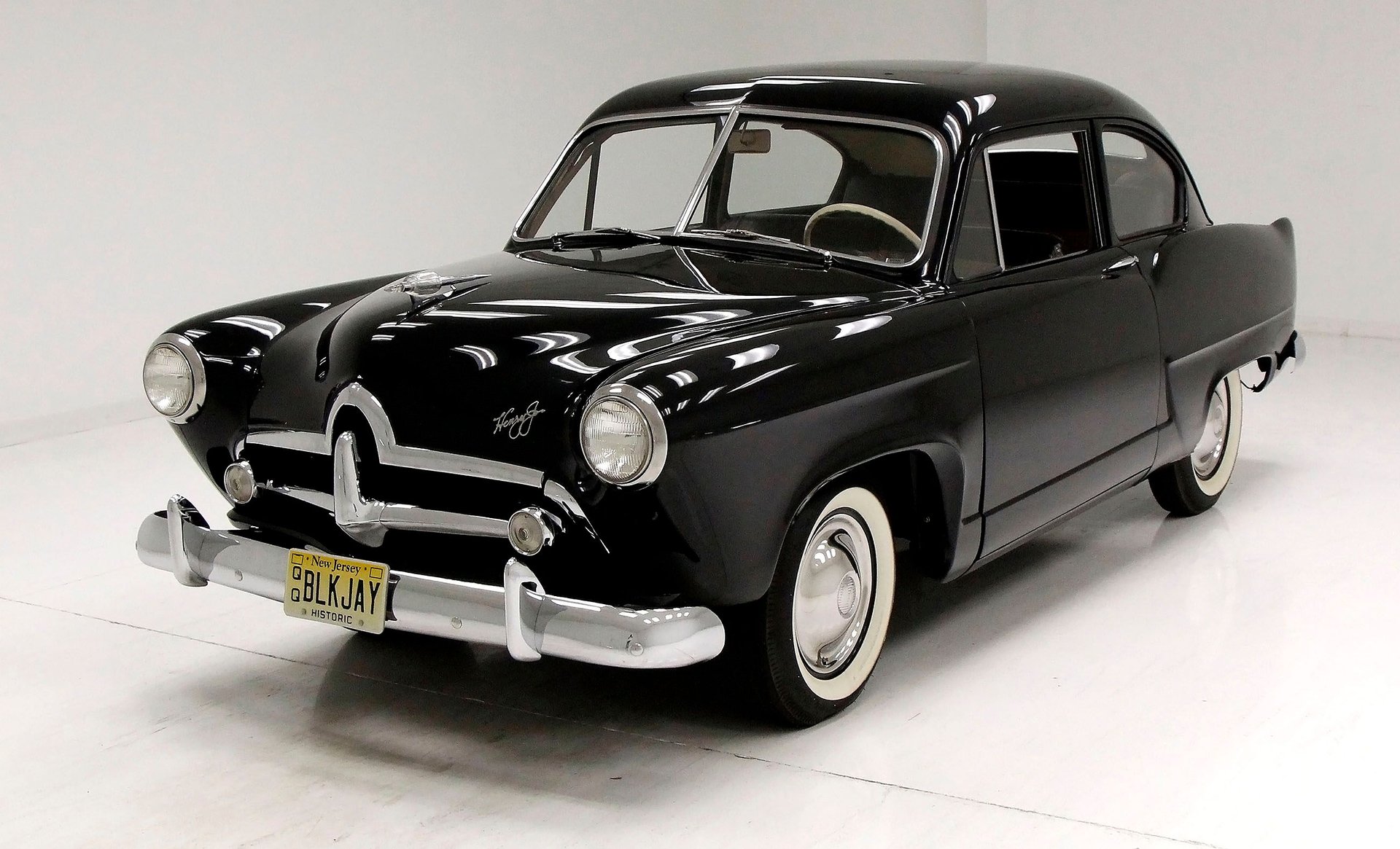 What's in a name? For Cordelia Maxwell Bell, that was a $5,200,000 question. The Berkeley, California widow, who held 200 shares in the automobile company started by Henry J. Kaiser after World War II, sued the company for that tidy sum in a complaint over how it named its entry-level car. The hefty lawsuit contrasted with the low price of the controversial new car, dubbed the “Henry J,” which promised to be a first-time new automobile for millions of Americans hungry for wheels after World War II. “The name is so ridiculous that it can be justified on no other ground than to satisfy a deep ingrained megalomaniac desire for personal publicity,” read Mrs. Bell's complaint, which went on to disparage the well-publicized naming contest that had resulted in the moniker.

For consignment a low mile, restored in 2002, original Henry J from its second year of production, 1951. A respray of black, a nice interior, and all the fixings of the quirky design, it was named fashion car of the year in 1950 . This car has been through several hands. Our consigner's fascination with it began when he was 8 years old and accompanied his father who was an electrician and was wiring a Kaiser dealer at night. Our young man had the run of the place and would climb in and out of the cars, and never forgot that moment, eventually owning 2 Kaisers and a Willys.

Exterior
Looking at the car in person it is truly a small compact car. With its Washington Capitol-esque profiled grille complete with center spear, dual driving and turn signal lights and large chrome bezel single front headlights. A nice big bumper hang below and lest we forget the script Henry J badge on the driver's side front of the bulbous hood. This hood runs rearward to a chrome framed split windshield, boxy steel doors and a rear quarter that has some fin to brag about. From the rear I cannot help but visualize a swimming manta ray with its wings (fins) in a tilted upright position, ready to plunge them downward the leave us in a cloud of sea and sand. These flank a simple round protruding taillight on either side of a trunk which is merely a panel, it does not open up (cost saving measure). Noted is the swept downward peaked rear window, which was done this way for added rigidity. Chrome K for Kaiser dog dishes covered by wide whites are on all 4 corners.

Interior
Kaiser is known for its creative license in the use of various vinyl's and patterns, and this cars interior is no exception with those liberties. Dark brown faux dragon skins cover the door panels. This is taken inside for the bolsters of the seats on the front split bench and rear bench. Inserts are a checked tweed like pattern in tan vinyl. A very utilitarian dash in black with a lower tan highlight houses a rectangular single speedo and gauge cluster arrangement. Black metal abounds on this dash, which is peppered with bakelite knobs and pulls, a gold heater and the script Henry J badge on the glovebox, but there is no glovebox...remember cost saving. The headliner is original and is original with some rips near the window surrounds and pillar covering areas.

Drivetrain
Dubbed the Willys Hurricane F Engine a 134ci Inline 6-cylinder, which is original to this car sits within a clean and restored engine bay, which also shows some nice patina here and there. This is topped by a Carter YF832S 1-barrel carburetor, and back by a 3-speed manual transmission, as well as a 4.10 geared rear axle.

Undercarriage
The beneficiary of a frame off restoration is when the frame can be removed, and all attended to then put back together and all is right with the world. This is the case underneath with no rust, black and sturdy framing, independent coil spring front, and leaf spring rear suspension. 4-wheel drum brakes are all around.

Drive-Ability
After a bit of a warmup she finally gave way and ran near perfectly. The transmission shifted smoothly, although one needs to not rush the shifter to the next gear as it may bind a bit. Smooth acceleration which will not attain breakneck speed, but then it does not try to do so. Brakes were really grabby, and pulled just a bit to either side, although mainly the left. A good smooth drive to sum it up.

A very interesting great shape and fine running piece of automotive history preserved thanks to a young boy who accompanied his working father to a Kaiser dealership, and earned an early fascination with the cars. Typical creative use of textures on the interior and an early mid 50's finned design, all with a mere 24,000 miles since the restoration in 2002 when the odometer was reset to zero. If you want attention, this car will be like a magnet for it.