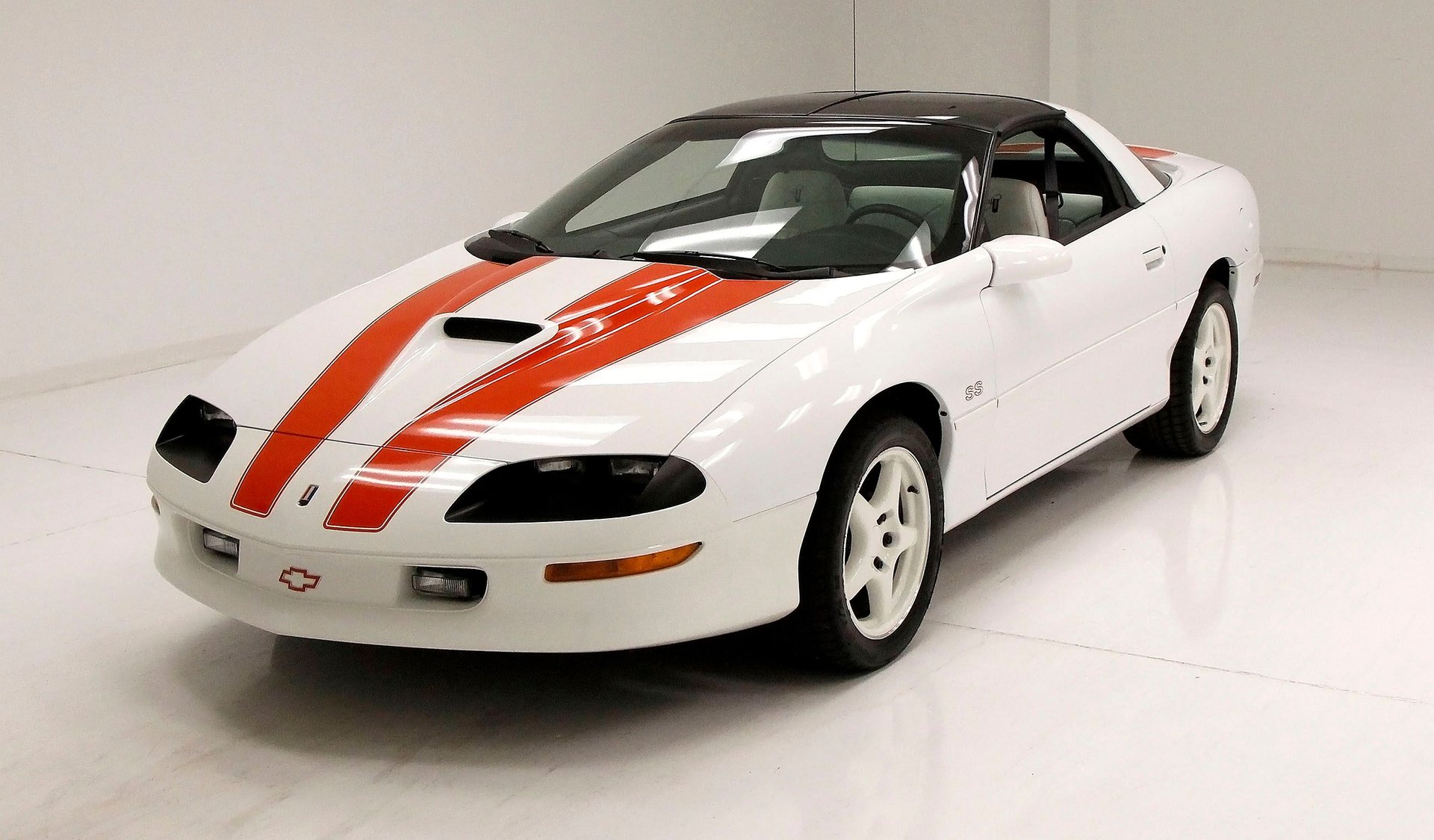 The Camaro was first created as a direct competitor for the Mustang. Chevy wanted to make a muscle car that could blow Ford's entry right off the map. They certainly did, but the beast they designed almost had a completely different name. The Camaro was originally code-named the Panther, and Chevy went so far as to prepare badging with that title on it. However, the name was altered at the last minute. It's not surprising that it was changed to a title beginning with “C.” So many Chevy favorites from the past carried monikers that started with the same letter, including the Corvair, Chevelle, and Corvette. When asked about the meaning of the Camaro's name, Chevy representatives defined it for the press as “a small, vicious animal that eats Mustangs.” On a more literal note, many sources suggest that the name, Camaro, was actually found by Chevy designers in a French/English Dictionary. In French, Camaro translates to “friend.”

For consignment a rare bird in the form of a 30th Anniversary edition 6-speed, smoked glass “T” top Camaro with a mere 9,053 original miles! According to the numbers, only 310 vehicles were produced with this combination. Couple this with the low mileage, and you may have the possibility of owning one of the lowest mileage editions in the country.

Exterior
The body uses a combination of a steel unibody with light, rust-free, and dent-resistant composite body panels. The rear fenders are structural steel, and the doors and front fenders are plastic as well as the scooped hood. Anniversary models are Arctic White with Orange stripes, and this example presents beautifully on the exterior fit and finish. A rear spoiler is atop the composite deck with large solar ray tinted greenhouse style glass. 17 inch x 9 inch ZR-1 style aluminum alloy wheels bedecked in white finish are on all 4 corners. The removable glass “T” top option is noted on this low production car.

Interior
Opening the doors to reveal the interior, we are met with black door panels, power windows, power locks and a toggle for the driver's mirror. As we slip inside to the curvaceous white power leather seats we notice nary a mark on them and they are sitting in a sea of black. A similar motif is in back with the 2+2 rear seats being divided by the hump and can be lowered to access the cargo space. The tops of the seats have a 30th Anniversary embroidered badge on them. A very clean dash houses various analog gauges and a digital odometer. Neatly clustered into the center of the dash are climate controls, and an AM/FM/Cassette and a Hurst shifter. Nearly showroom black carpet with slightly lighter special SS floor mats are on top of the carpet top further protect it.

Drivetrain
Flipping the lightweight hood, sandwiched into the rearward portion of the engine bay (for weight distribution) is a 350ci LT-1 V8 complete with electronic fuel injection, and a T56 6-speed manual transmission. This combination pushes power rearward to a 10-bolt 3.42 geared rear.

Undercarriage
As expected for a garaged well-kept pampered car, minor surface rust on the usual steel parts, and all very clean underneath. Independent coil spring front suspension, and coil spring rear suspension along with power disc brakes on all corners is also seen.

Drive-Ability
We are very careful not to put any frivolous miles on low mileage cars for obvious reasons, so we started this car and took it only around the lot, where it ran smoothly, and gave us a good, all be it short ride.

Rare find here folks, in the form of the T-topped 6-speed Anniversary Edition with super low 9,053 original miles and 1 owner from new. Quite the way to celebrate an anniversary, it's yours for the plucking right out of Classic Auto Mall's halls.

Offered at $46,000
view inventory
Thank you for your interest! We'll get back to you soon!
Speed Digital