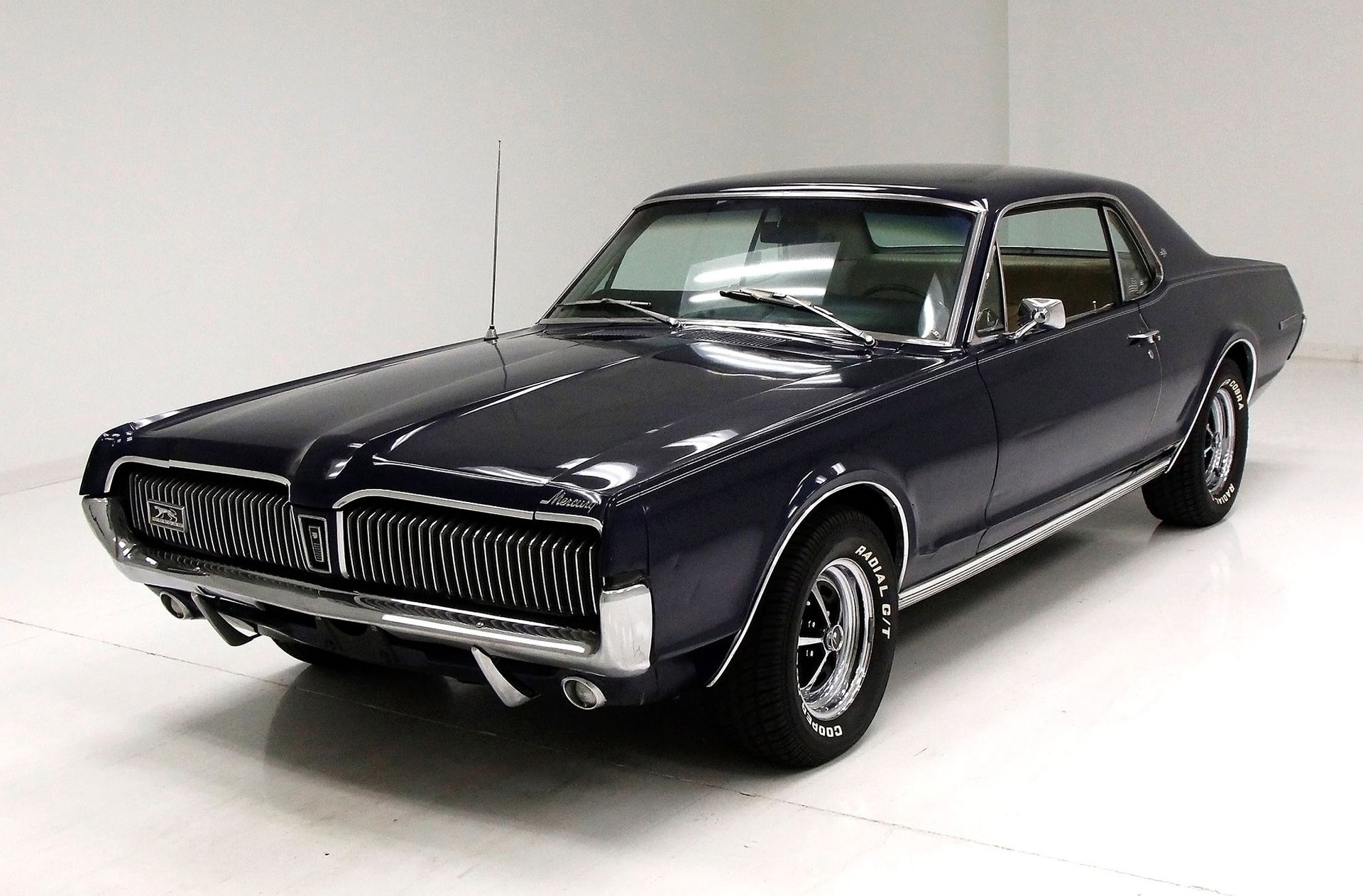 Not exactly hot on the heels of Ford Division's extremely successful Mustang, was the 1967 Cougar. Actually, the decision to go ahead and build Mercury's version of the Mustang was made in February of 1965. The Cougar was envisioned to be a more elegant, high line Pony car that would exude a bit more class and yet still encompass the qualities that made the Mustang so popular--a smaller sporty sedan that would handle well and still be economical enough for the younger customer.

For consignment…an original survivor, with a respray on 2005. Over its life it had 3 owners, the second only had the car a mere 3 months as a grandfather bought it for his grandson, and the grandson wanted a Mustang! This car has had a mechanical “freshening” up in 2005, and since has seen low miles. Some new carpeting and weather stripping are in boxes yet to be installed but will accompany this car.

Exterior
The Cougar is quite different from the Mustang in the realm of styling. Most noticeable was the front end "electric shaver" split Grille treatment with concealed headlights. At the rear, it came with T-Bird sequential taillights. These taillights have been converted to a digital sequencer, so they work flawlessly. Caspian Blue covers the panels which show some usage, but certainly not out of the ordinary, and no rust is visible, just a few dents and dings. Chrome bumpers and all trim retains its shine and shows very little wear. Dual exhaust with chromed tips peek out the back at the bottom of the chassis. Mercury polished wheels are noted on all 4 corners and are wrapped with Cooper Cobra rubber.

Interior
Swinging one of the two doors open we are met with your grandmother's couch in the form of 2 front buckets and a bench in the rear, all covered in their plastic protective coverings. If there was a lampshade, I would expect it too to have the cello packaging that takes 2 hours to unwind off of the shade, hence why most stayed on! White (Parchment) leather is underneath the protective plastic, which has yellowed over time. With these coverings on, one would assume that the white leather has been well preserved, but we did not remove any of it to look. This car sports the XR-7 package, which was introduced in January of 1967. Much was made of the Cougar's Euro theme and the XR-7 accentuated this. The dash was covered with burled walnut applique while the regular warning lights in the right hand dash pod were replaced with three gauges for fuel, water temperature and amps. A 6,000 rpm tachometer was housed in the right dash pod, complementing the 120 mph speedometer on the left pod. The clock, which was located in between the two large pods was relocated to the center console, underneath the radio on the XR-7. Adding to the European flair, was a row of Jaguar style toggle switches above the center vent which controlled various interior lights and an overhead console which contained warning and map lights.

Drivetrain
This Cougar is equipped with a 289ci V8 with a single 2-barrel carburetor sitting on top. A 4-speed manual transmission is behind this engine and is a Toploader. Power goes rearward through a Ford 8” 3.00 limited slip pumpkin.

Undercarriage
Some surface rust is seen, however mostly unaffected by the elements other than some patina. Frame is solid, and drum brakes are all around. Dual exhaust in good condition work their way to the rear of the car.

A few bumps and bruises, a respray, however a mostly original car. An upgraded XR-7 package, a nice interior, and a solid working engine that starts quickly. If I were that grandson, in hindsight he should have taken the Cougar, as there are far fewer of these around today than the comparable Mustang, and overall is a much more luxurious car, better ride, and more engine options.