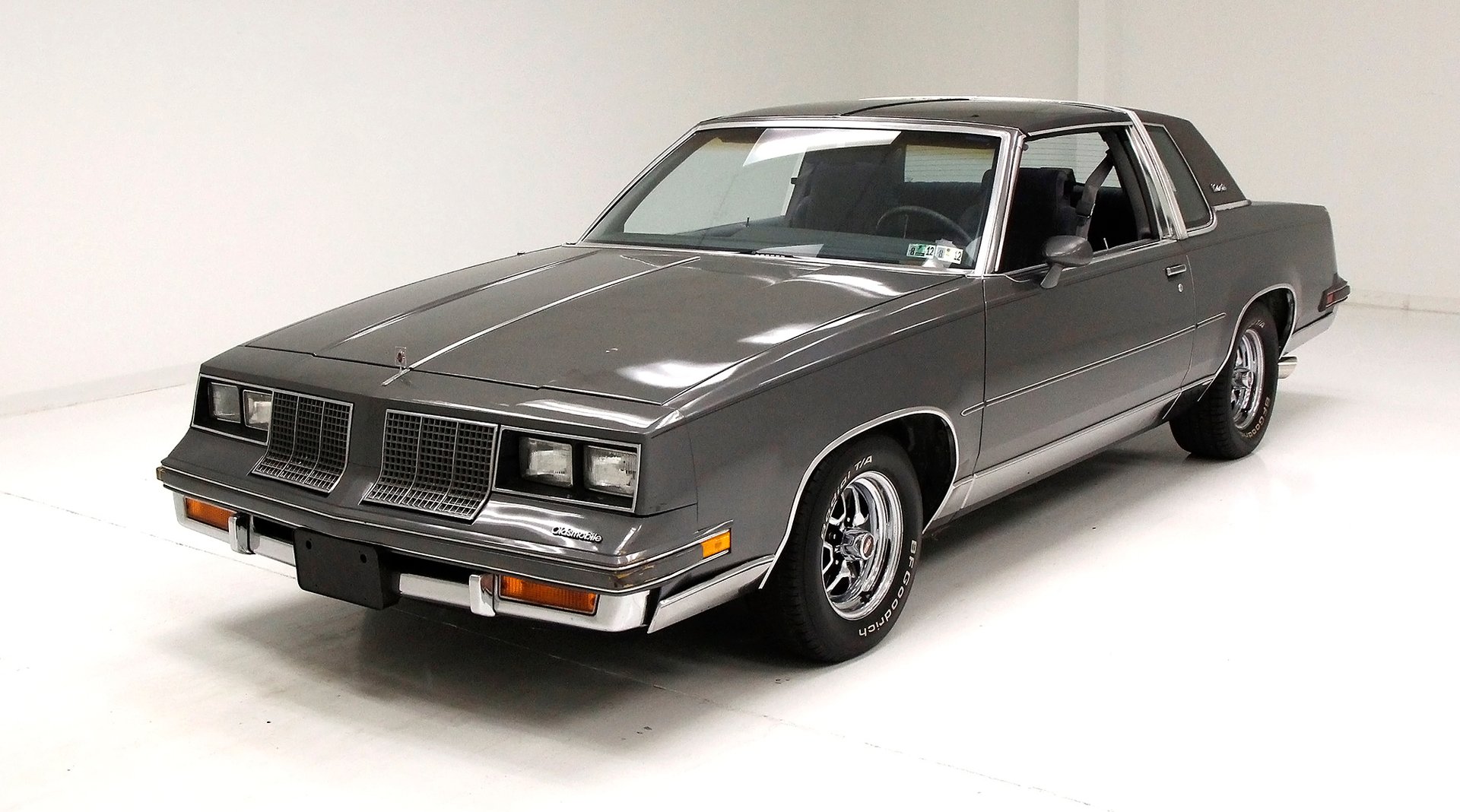 The Salon naming began again in 1985, where the Cutlass Supreme became the Salon, and was the top of the line Cutlass for this year. The word Cutlass is defined as a short curvy one-edged sword that was used by sailors. The Oldsmobile Cutlass Salon (Supreme) was the best-selling car in Olds history. With its clean lines and numerous model offerings, it is clear to see why.

Purchased in September 2006 in Lancaster, Pennsylvania (116K miles) from the second owner, an elderly man, who bought it from the original owner in the late 1980's. The second owner stored it during winters due to the RWD and his wife drove it primarily. Car was all original at that time with the Buick V6 and a/c. The current consigner and owner has always kept it in his garage since purchasing it. He drove it occasionally until mid-2008 when it was decided to upgrade the drivetrain with a 1970 Oldsmobile 350ci V8 and a 350 turbo t3-speed automatic transmission. Work was completed by spring of 2009. We give you A Cutlass Salon with a twist!

Exterior
Covered in a respray of correct Gun Metal Gray, this straight steel car with a removable body matching “T” top and Vinyl landau rear covering the roof, presents in nice condition. A few faults in the paint can be seen such as a scratches in the bumper upfront, some lighter drips? on the driver's rear quarter panel, and dulling on the trunk lid. Stainless rocker covers are noted stretching front to rear on both sides. SSII chrome wheels, are wrapped by BF Goodrich Radial T/A tires, P245/60R14 rear, P205/70R14 front. A large chromed exhaust tip peeks out from each side just behind the rear wheel. Badging is all correct and consigner states that new emblems and trim pieces are included with this car in case you want to do another repaint.

Interior
The entire interior was removed, thoroughly cleaned and reinstalled with new carpet and floor mats. Having all the options of a 442 including power windows, power locks (not working), power steering, power brakes (front disc/rear drum), cruise control, tilt wheel, and a power trunk release included, although not installed. A/C system was removed but all components are included with sale. This car has front bucket seats, center console, and rally gauges, with ..count them…12 idiot lights to tell you of any impending doom. Noted is the mid 1980's square design dash, also in gray but with plenty of faux woodgrain. Within these wood panels resides an original AM/FM radio with cassette player, and power antenna.

Drivetrain
Direct from 1970, a rebuilt Olds 350ci engine, bored .30 over, done by Krimes Machine Shop in Ephrata, Pennsylvania. This healthy mill is topped by a Rochester 4-barrel Quadrajet carburetor. On back is a rebuilt 350 Turbo automatic transmission, 3-speed. Further back we see a 3.73 gear rear end, from a 1987 Monte Carlo SS. Hedman Headers w/ 3” X-pipe dual exhaust, chrome tips, snake their way rearward, and evacuate the burned fossils quickly.

Undercarriage
Eibach springs, front and rear, have lowered the ride of this car about 2”. New shocks, a Pro Torque Starter and a GM V8 Radiator with a 14” electric fan keep the horses from foaming too much. Under here we can also observe a rust free, structurally sound undercarriage, and sturdy frame.

Not your father's Oldsmobile, but it can be yours. Also included are a spare Rochester 4-barrel carburetor that has a small crack in the body, a complete set of shop manuals for 1970 Cutlass and 1985 Cutlass, Fisher Body manual and additional reference manuals.