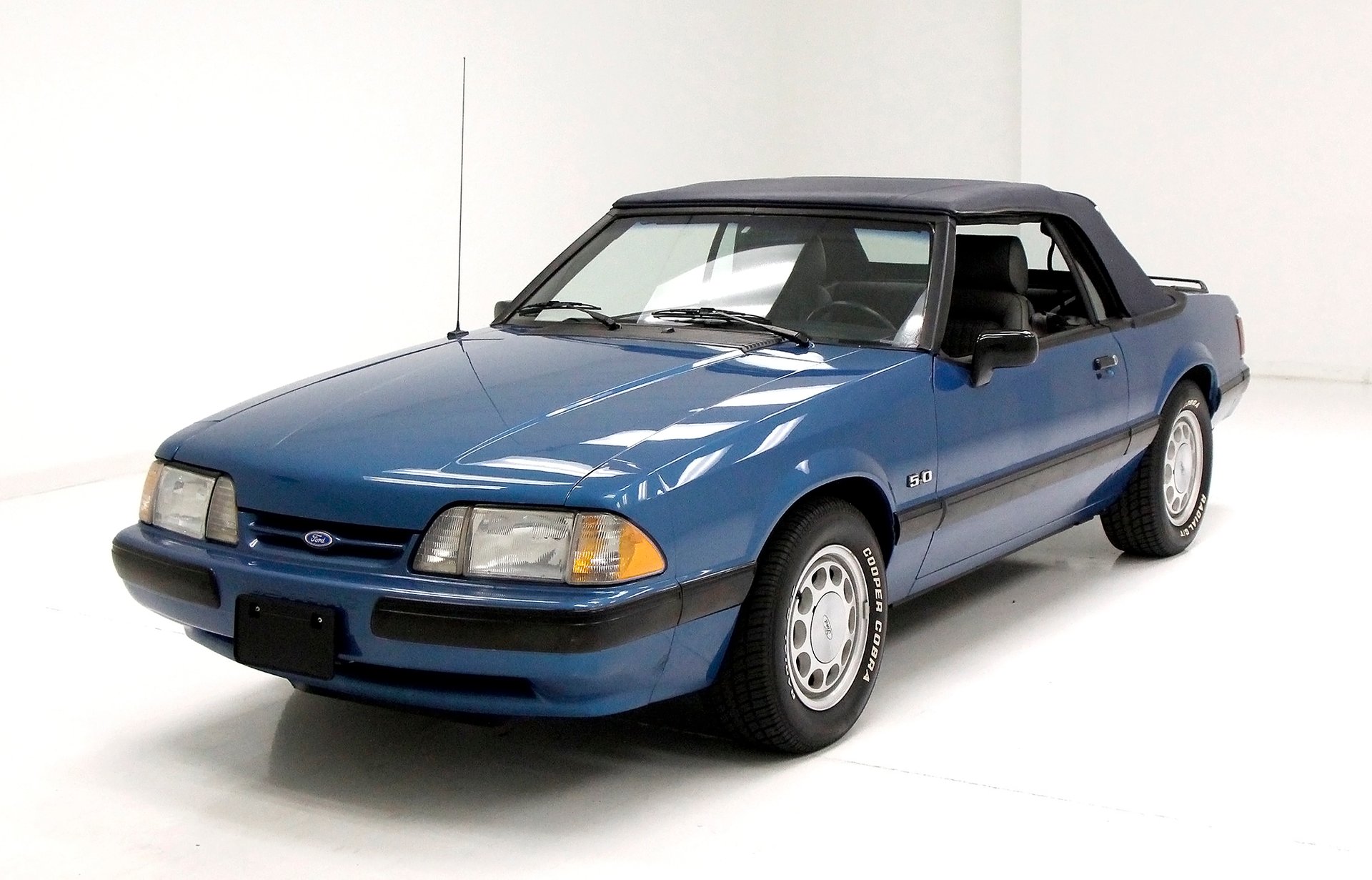 Jack Telnack was a VP of Design at Ford of Europe up from 1972 to 1976. He and his team focused on aerodynamics to help reduce fuel consumption on Ford's European cars as fuel was still much more expensive than in America. He used the wind tunnel to aid in designing some of his vehicles such as the Granada, Rally Escort and the European Capris. His designs had a very European functional design with low front ends, slopping hoods and in some cases slant-back front ends. Several milestones were made with the 79-93 Mustangs such as the resurrection of the Mustang GT, turbo four-cylinder models (SVO and Turbo GT) and the Cobra and more rare Cobra R models. Not only are the Fox Mustangs popular with enthusiasts and racers but they are being considered classics by more and more people.

This Fox-stang was the best of times for generation 3 Mustangs. This particular model has a powerful 5.0 Liter V8 with fuel injection and produces 225hp, the highest of generation 3. Originally a Dark Shadow Blue and Dark Blue top now a lighter blue respray this car presents nicely. And it has a mere 48,500 original miles on the clock.

Exterior
With the new respray, a lighter blue covers this car. The original Dark Blue Vinyl convertible top is on this car and is fully operational and has a clear rear window, which is also scratch free. Headlights are clear, bumpers are not marred, and a nice black molding runs 360 degrees around the belt line of the car. An optional luggage rack adorns the trunk lid and aerodynamic aluminum wheels wrapped in raised white lettered Cooper Cobra G/T radials on all 4 corners.

Interior
Normally this is where I'd write a pop of the doors or swinging open the doors we see…BUT this car I can say lowering the convertible top, reveals a plaid cloth insert, with a vinyl bolster pattern in gray tones and black. The seats retain their good padding, and the upholstery is not worn. Dash is pristine, with all original instrumentation. Power options abound like power locks, power windows, power mirrors and multiple way power seats in front. These seats reside within a sea of nicely preserved gray carpeting. Door panels retain their original charm and are clean with no rust on the lower doors. A sad note the Air Conditioning blows warm and will need a repair.

Drivetrain
1989 brought us the same block, heads, intake and exhaust manifolds as 1987. Mass Airflow (MAF) EFI allowing for better performing cams and yielding the most horsepower of the generation at 225. This is produced by a 5.0 liter V8 which sits in a well-engineered close tolerance engine bay which is very clean with no corrosion. This nice mill is backed by an AOD 4-speed automatic transmission.

Undercarriage
Well-kept would be the buzzword here with no surface rust excepting the usual bare steel exposed to the elements, but floorpans, frame and rockers are rust free. Independent front suspension, and 4 link on the rear, we can also see power disc brakes up front, and power drum brakes on the rear. A factory replacement dual exhaust has been installed.

All in all, a nice example, with a bit of a different respray, but original top, and interior which is nice, and it's a convertible!! Feel the power of the EFI 5.0 liter which has been well maintained, as has the rest of this Fox Bodied Gen 3 Mustang. Go Horsey!!