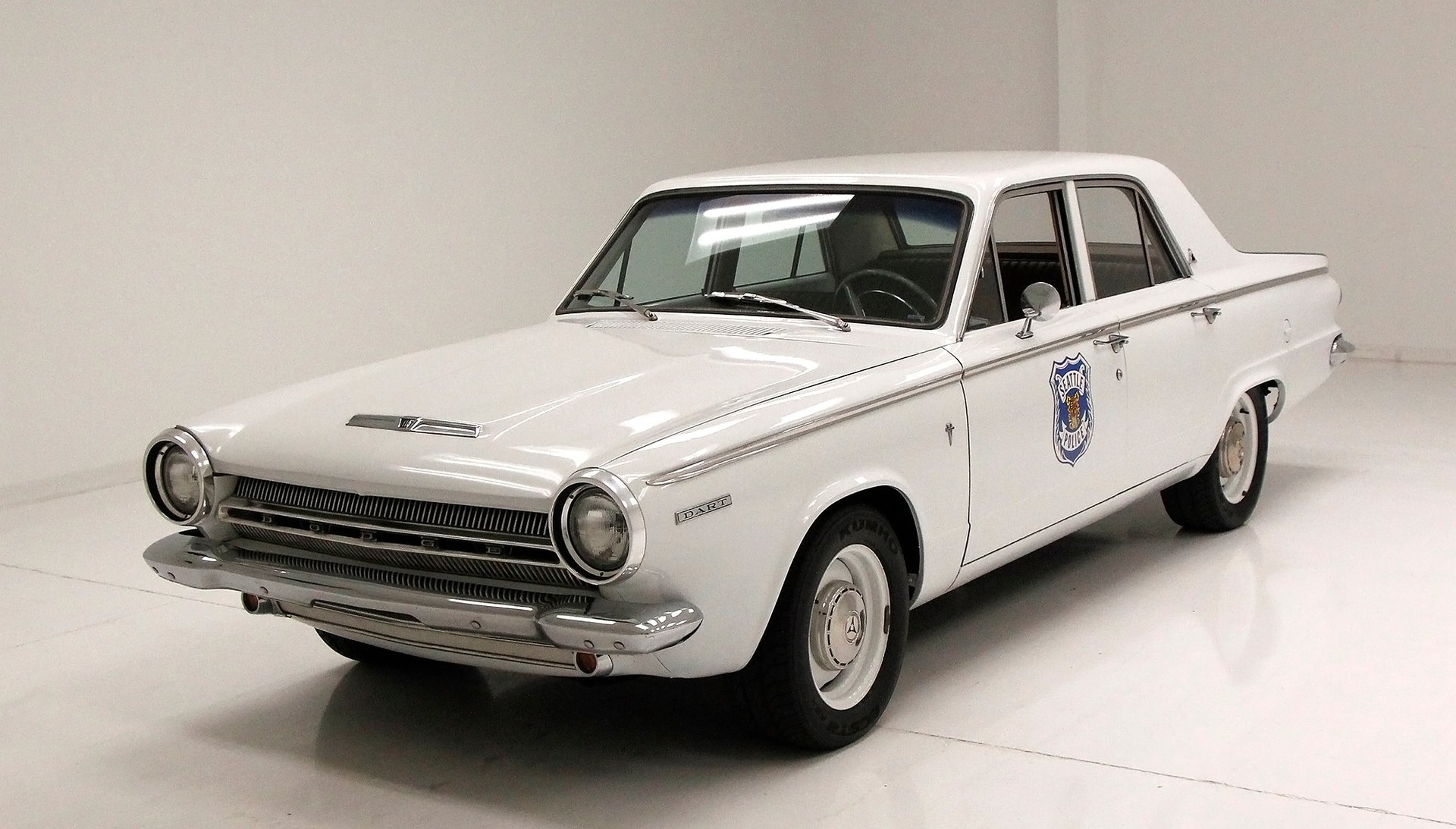 This 1964 Dodge Dart was constructed as a tribute to the Seattle Police Department. Although the department's full-time marked fleet consisted mainly of Fords during the 1960's they also had a few Dodge Darts In service. A few performance upgrades, and some sneaky mechanicals, this is a replica of a working police car right out of 1964.

Exterior
Bathed in white, this car retains its original exterior bodywork, and design. It is virtually rust free, with straight panels, good gaps, and original good condition chrome and badging. Tiny rear fins topped with brite work hover above circular simple brake lights. Plain white steel wheels have the iconic Dodge wheel covers. The police equipment on the exterior includes vintage emergency lights mounted behind the grille that flash alternatively, and a mechanical siren. The Seattle Police Logo on the door is magnetic and can be removed at your convenience.

Interior
Again, looking much like it came from the factory with its simple 2 tone dash, original steering wheel, long brown vinyl bench, and rear bench, which hold any perps you may run into along your parade route. Noted is the original pushbutton transmission, has been replaced by a column shift from a 1966 Valiant. Door panels show nicely, as does headliner which appears to be original.

Drivetrain
Running a bit stronger than the standard Dart from 1964 thanks to a 1977 360ci with later Magnum cylinder heads. Also, inside are an Edelbrock Performer cam with the Magnum's 1.6:1 rocker arm ratio, the lift at the valve is .448 inches. It also sports a Comp Cam's double roller timing chain and a Hughes Performance cam snout extension on which a standard fuel pump is mounted. A Mopar Performance dual plane intake manifold pumps plenty fossil into the mill working in conjunction with a 750 CFM Edelbrock Performer. These spent gases are evacuated efficiently via early 340 manifold units. A 1977 A-904 automatic transmission replaces the push button activated standard transmission of the original Dart. The transmission is fitted with a planetary gear train to gain lower ratios in first and second gear (for parades). Raybestos clutches, a solid kick down band, a Turbo Action shift kit, and deep pan round out the power plant modifications.

Undercarriage
Mopar Performance 524912 torsion bars and Adco front sway bar and 6 leaf rear springs make up the modified suspension. A custom driveshaft throws power rearward to a later 8.25 axle. An adjustable proportioning valve in the trunk can be used to modify the performance of the dual circuit master cylinder late 1970's B-body disc brakes (11.75” rotors) and 10 x 2.5 drums in the rear. All Dot 5 brake fluid is used for this system.

A restored mostly original Dodge Dart with plenty of power modifications, suspension upgrades, and some added on Police goodies, and you are ready to do some pat rolling down the highway or throwing candy to kids in a parade. Either way this car is equipped. Dial 911!