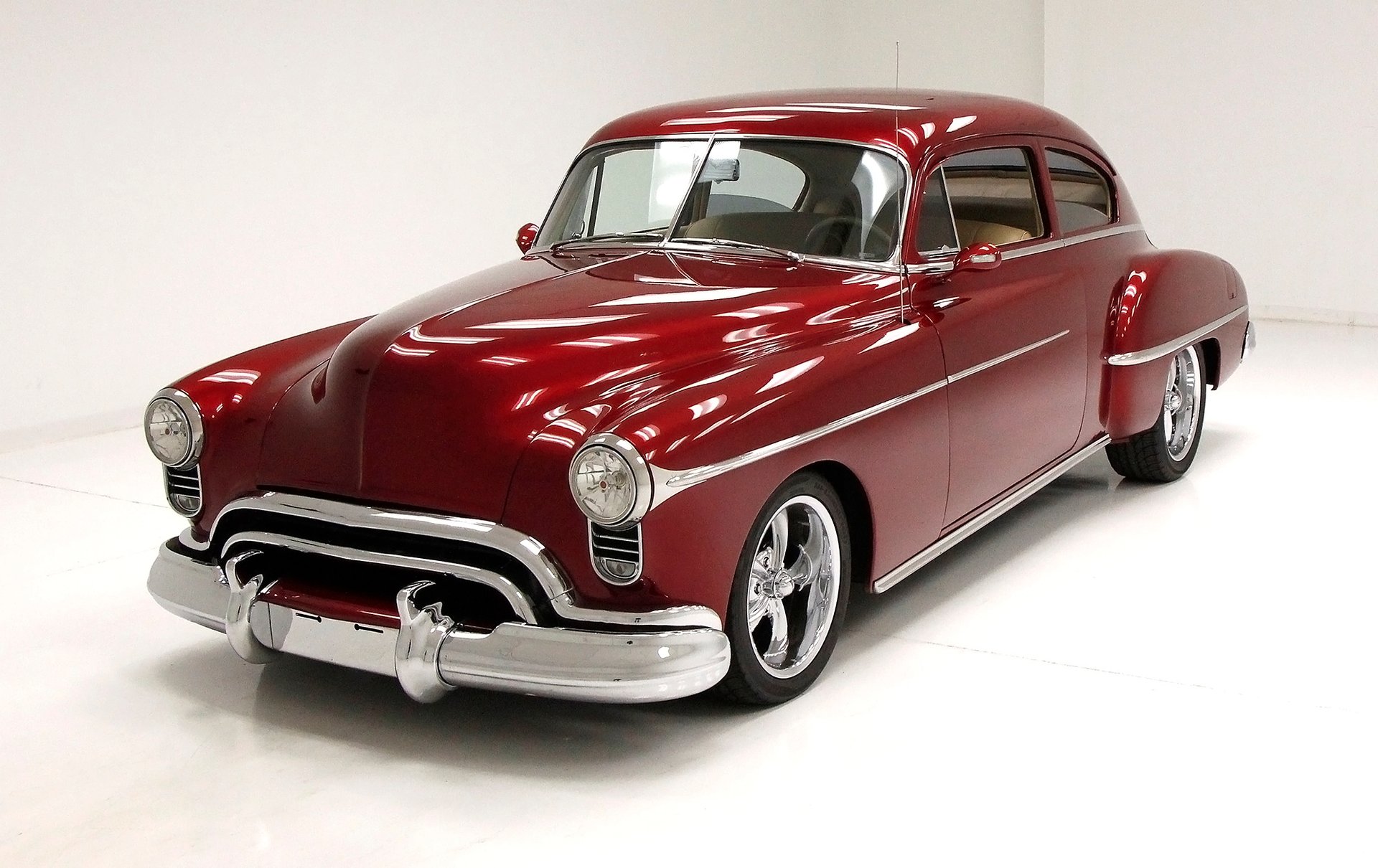 Oldsmobile introduced the 88 badge in 1949. It was named to complement the already existing 76 and 98 and took the place of the Oldsmobile Straight-8 engined 78 in the model lineup. The new car used the same new Futuramic B-body platform as the Oldsmobile Straight-6 engined 76. but paired it with the powerful new Rocket V8 engine. This combination of a relatively small light body and large, powerful engine made it a precursor to the muscle car. The Rocket 88 vaulted Oldsmobile from a somewhat staid. conservative car to a performer that became the one to beat on the NASCAR circuits. It won six of the nine NASCAR late-model division races in 1949, 10 of 19 in 1950, 20 of 41 in 1952 and was eventually eclipsed by the low-slung powerful Hudson Hornet, but it was still the first real "King of NASCAR."

Looking for your father's or grandfather's Oldsmobile that has been turned into a resto-mod? The look no further at this GM post War design that would influence the eventual Buick Riviera, and even the Corvette. Modified, meaning shaved, lowered stance, big engine, and beautiful interior, while still maintaining its original line. Not your father's Olds, but uniquely yours!

Exterior
The Red finish and chrome trim on this car is gorgeous and in overall excellent shape. Its body is straight and solid, its massive chrome bumpers shine brilliantly and form that frowning front end. The chrome spears at the belt line say it all: F U T U R A M I C. Get a load of that fastback rear with custom tail lighting. The aero lines on this car are to die for. Meticulously restored steel show consistent gaps and runs straight and true. Ridler chromed wheels and Ridler tires complete the look.

Interior
Swinging open the doors we are met with custom flame embossing in the door panels, and shiny cranks and handles. A super stuffed parchment colored, leather covered split bench stretches from door to door. Some tuck and roll work here and throw on some parchment matching piping and we are livin' large. A matching rear bench is noted, and these float in a sea of pristine Deep Red Carpet. Matching floor mats sport parchment trim edging. The original dash has been retained, but plenty of added bling in the form of a chromed tilt column, leather covered rally style wheel, totally radical chromed knobs, and some extra gauges as well as air conditioning is hanging from the bottom of the dash. Even a look upward shows more embossed flames in the headliner…hot!

Drivetrain
A flip of the hood and we are in polished stainless-steel heaven! Let alone now we get to meet a 454ci Big Block topped with a Holley 770 CFM Street Avenger Carb setup and strapped to the back a smooth Turbo 200R4 automatic transmission which was just installed last month.

Undercarriage
All clean all structurally sound, and some added extras like power rack and pinion steering, Air Bagged rear suspension, a new 9” Ford rear and axles with 3.70 gears, and a new driveshaft.

This example is one of only 11,989 Sedanettes produced in 1950 and has benefitted from a complete restoration. 1950 was the pillared Club coupe's final model year. This is simply one bad ass car that has undergone the transformation complete with new powerful engine, and various mechanical upgrades. A high-quality build throughout with attention to detail. Not your grandfathers Oldsmobile anymore baby!