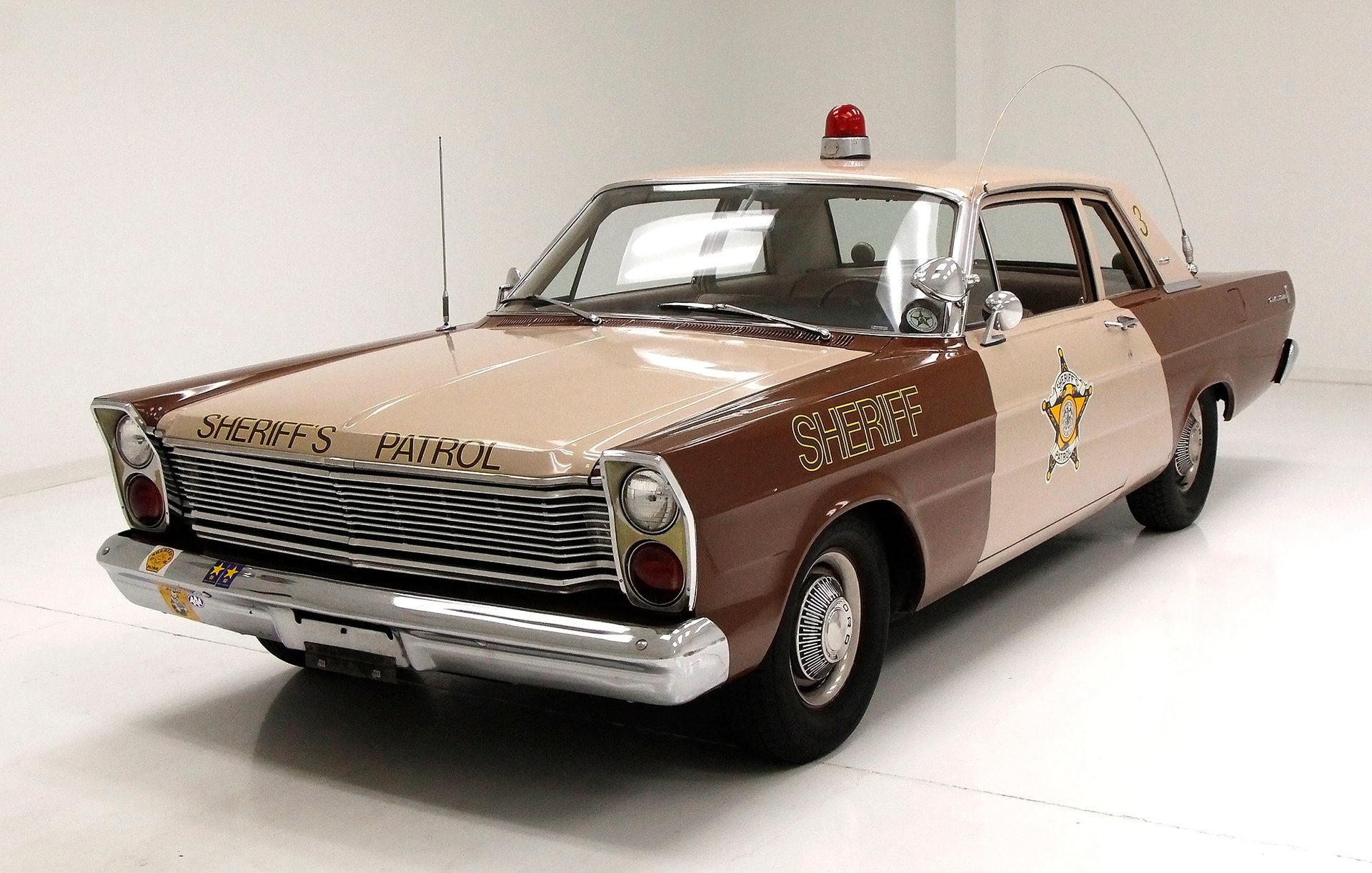 Let's turn on the B & W TV and see what's on in 1965….The opening theme song was called "The Fishin' Hole." It was composed by Earle Hagen and Herbert Spencer. That's Earle you hear whistling the song himself on the show's opening and closing credits. Everett Sloane composed the lyrics to the song, which were never used on the series. Andy Griffith actually made a record of the words to the song. At the beginning of the show, where you see Andy and Opie walking down the road together, you will see Opie throwing a rock and Andy nodding or shaking his head in acknowledgement. This was Andy's personal tribute to his own father, who he said would shake his head in the same manner to tell him "nice work" or "good job."

Yes, my friends right out of 1965 Law enforcement with all its fixins, we give you a Custom 500 Sheriff's car. This was an actual car used for Sheriff work, and it would be utilized to do everything from high speed chases, to transporting prisoners, to shootings. Owned by a rural Sheriff's department from 1964 through 1968, it was witness to a lot of action, and is equipped to do so. A uniform, and ticket book hanging in the back seat proves this to be true.

Exterior
In lieu of the iconic Black and White, we are met with a calmer Brown and Tan two tone exterior paint. Some areas of scratching, and denting are present, but are battle scars from its years in the line of fire, so to say. Emblazoned with Sheriff Badging, it has a long whip antenna, a “bubble gum” spinning red light on the roof, lower red flashing headlights, and a very loud siren/loudspeaker system. Overall, it's a standard Custom 500, with good gaps, straight steel, and was cared for in its after-service life.

Interior
A Palomino dyed split bench in vinyl covers the front seat, and for the perps, a rear bench stretches from door to door. Watch your head when you are getting in with your hands behind your back. In addition to the standard dash, and instrumentation which is very clean and original, we note a gaggle of electronics in the center below the dash, to include Light/Siren Controls, Police radios which are fully operational, a CB radio, and working radar. The headliner has a few soil marks but hangs tight. Carpet is a bit worn and shows some age.

Drivetrain
A 240ci Inline 6-cylinder, original condition, is found under the hood. It has a 1-barrel carburetor, and a 3-speed automatic transmission. A test drive revealed it runs well, shifts smoothly, and when we could actually hear the engine above our overzealous use of the siren, it was quiet.

Clear the highway, and set the roadblock, as we are in hot pursuit of a suspect. Sirens blaring, lights flashing, and on the radio with HQ, we picked up a guy who was doing at least 42 in a 25 zone. This car can still do it all, and the presentation is very nice. A few battle scars, but all in working condition, thanks to a Sheriff owner who kept it a secret that he actually owned it for 20 years. He is now serving life for doing so…NOT!