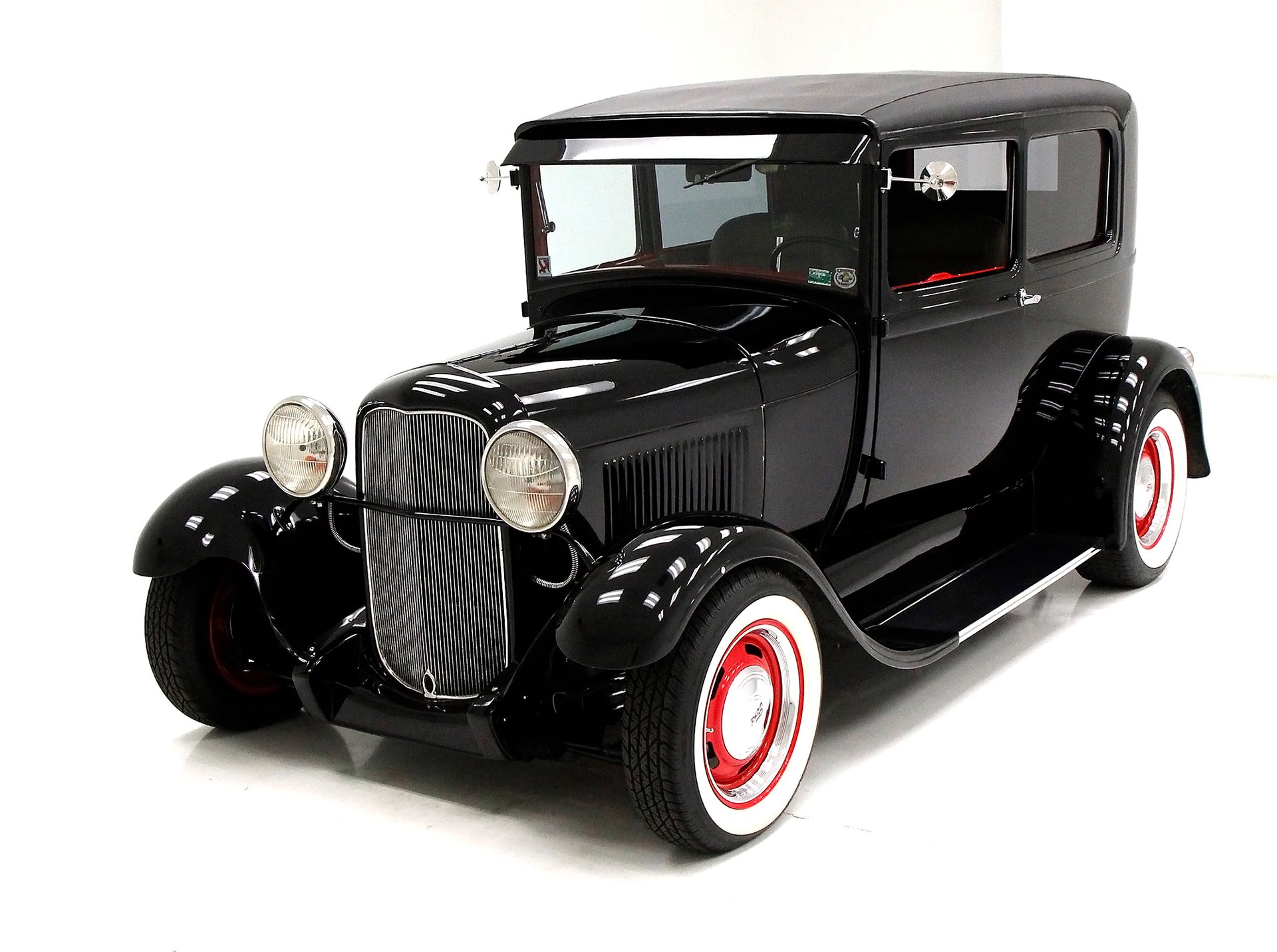 The timeline for hot rods and custom cars starts before World War II. Teens itching to tinker with cars and go fast were racing cheap Ford Model Ts on Southern California's dry lakes and street racing in Los Angeles even in the 1920's. The Harper, Muroc, and El Mirage dry lakes -- all 50 or so miles north of Los Angeles -- saw racing activity from the '20s up to World War II. Racing at El Mirage continues today. The vast majority of the cars being run were four-cylinder Ford Model Ts or their successor, the Model A. The cars were cheap, plentiful, lightweight, and easy to work on.

For consignment a wolf in sheep's clothing, in the form of a mild-mannered looking Ford Model A Hardtop. An initial glance at this car and it would look like a typical model A with the incorrect wheels and tires on it, however if one was to dig further, you will find all kinds of goodies!

Exterior
This mostly original looking Model A is pretty much how it appeared when it rolled off the assembly line in 1929… however a hot rod shop from Arkansas got ahold of it and took the bull by the horns. It now features a chromed '32 front grille, a vinyl roof that does not leak and emulates an original and is a full fender straight steel car dipped in gloss Black. LED taillights, and '34 headlights that have the amber turn signals built into them flank the grille. Noteworthy are the contrasting Red steel wheels, with chrome dishes and Ford logo moon caps. These wheels are surrounded by wide white sidewalls, and radial tires, and look just so cool on this otherwise jet-black car.

Interior
2 tan leather buckets (passenger seat is power) up front and a tan cloth rear bench fill the passenger compartment. Black carpet floods the floors, and up front a neato red dash with a raised chromed horizontal lined gauge cluster in its center. A 1940's bakelite steering wheel in excellent condition, and in black fronts the wild red dash and has an ah-ooga horn. Speaking of wild, a tall Genie shifter with a Frankenstein shift knob raises from the black sea of carpet. Up top is a tan cloth headliner, with an AM/FM/CD player that can be remotely controlled. Consigner states that A/C has new hoses but needs a condenser which would be mounted in front of the radiator and pulling fans in back, as well as a charge to have it work.

Drivetrain
A lift of the cowls on the sides of the hood which are held up by stainless props, reveals a 350ci V8. This is topped by an Edelbrock 4-barrel carburetor, has headers, and a TH350 automatic transmission bolted on the rear. Shining valve covers, with red accents, and a red engine block, red distributor cap, and red and chrome air cleaner housing, definitely add to the mystique, and the previously noted wolf in the sheep's clothing.

Undercarriage
A boxed frame is seen front and back, and 4-bar coil-overs in front and back can be noted. There have been recently replaced brakes and rotors, and new ball joints. The front end is either Heidts or Mustang 2 and it is fitted with an S-10 rear. All this is structurally sound and rust free.

So how great would it be to pull up on a more modern-day car, and get the old HEY GRANDPA! wave, and you proceed to smoke the instigator, as they would remain totally unknowing of what's in store for them. A nice build accented with chrome and red, and a big V8 under the cowl.